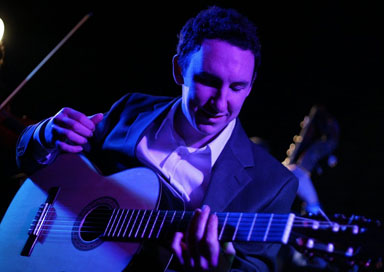 Looking for a guitarist for your event? The London Event Guitarist is a classical and modern acoustic guitarist from London. A virtuoso performer in many styles from classical and Spanish/Latin to jazz and pop/rock, he has provided beautiful music for events for many years, from corporate dinners to weddings to royal engagements.

For a limited time, he can provide potential clients with a free no-obligation custom recording of any music track not on the audio/video player.

“He was really great. Was the perfect send off for my Dad who loved classical Spanish guitar music. Highly recommended. ”

“He was incredible! He was so accommodating and so easy and relaxed. He provided a mellow atmosphere and provided a great range of songs - some of which were requested and others being part of his repertoire. Our venue thoroughly enjoyed having an acoustic player as opposed to something more traditional and commented on how professional he was and how easy he was to work with. We would completely recommend him to others and if the event rises, would use his services again. ”

“He was just GREAT! The music was perfect, and our members loved what he played! ”

“Regarding recent performance at the Oval?George was smartly dressed, very friendly and his music went down well with our clients. He fulfilled our brief perfectly and we wouldn?t hesitate to book him again. ”

“Friends Of The Earth A big thank you from FOTE for your fantastic guitar playing and for making our event so special? ”

Friends Of The Earth,

“His imaginative choice of material and beautiful playing combined to create the perfect atmosphere at our reception. ”

“He played at our son's Christening reception, and his playing created the relaxed, welcoming atmosphere that we wanted. ”

“He played the guitar with great sensitivity and it was a pleasure to hear and see him play. ”

“He performed at our charity concert. He enthused the audience with his playing and we all felt like taking up the guitar after that! ”

“Thanks to him for playing so beautifully at the wedding - I'm so pleased that we booked him - much better than a harp! ”

“I was very pleased with him and would like to thank him for the sympathetic and excellent service he provided. He played beautifully and I know that several people, including myself, expressed our pleasure at his playing. ”

“Dear Geoff, please forgive me for not writing sooner to say how totally delighted we were with the guitarist and his wonderful guitar playing. He gave a really special atmosphere to the party and as he was sitting very near a huge paella and a large leg of Iberian ham, his Spanish tones went marvellously with the whole hispanic theme.We were incredibly lucky with the weather for the party which was a huge success judging by the feedback I have had and anyhow we all enjoyed it hugely as did the bride and groom!Many thanks for providing a really special element of the party which was very important to me. Your agency was so efficient and professional and he was a complete star! ”

“Thank you so very much for playing so beautifully at our wedding on the 23rd. Everybody commented on how well you played and at what a special atmosphere your music gave to the ceremony. I am only sorry I wasn't in the room to hear more, but I really enjoyed the pieces you played during the signing of the register and especially appreciate you taking the time to learn Here Comes The Sun. It really wouldn't have been half as nice without you there and we are so pleased that you were! I very much hope that we will have the opportunity to hire you again in the future and until then send you all best wishes and many many thanks again. ”