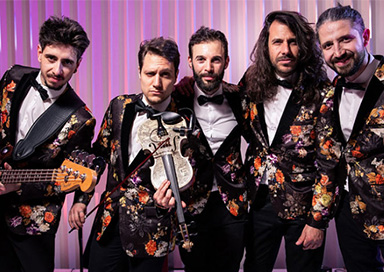 The London Italian Singer can be booked as a duo, trio quartet or full band.

Guide price is based on a duo.

He was born on the West coast of Southern Italy and grew up in a small village in the heart of the National Park of Pollino.

Mountains and sea, combined with the classical and folk music typical of the area, have always played an important role in his life and contributed to shaping his personality and philosophy.

He had the luck to grow up in a family where music was extremely important. It was his grand-father was a composer of classical music, and he passed on the passion for music to him.

After initially studying classical trumpet, The London Italian Singer moved on to focus on vocal studies, developing a highly original vocal style taking in techniques as diverse as Italian Opera (Covent Garden) and Mongolian throat singing. Combined with his natural talent for theatricality and physical expression, he moves effortlessly through this astonishing range of vocal styles to create a captivating and often hilarious tragic-comic stage personality.

His band provides the most fun you can have in London. Prepare yourself for a blitz of eccentric theatricality, wild gypsy beats, virtuoso fingerwork, wanton genre-mixing and lunatic dancing.

The show blends fast & furious folk beats from across Europe with Classical Opera, Mediterranean, Neapolitans, Tarantella and chart pop in an epic journey around the globe worthy of Colombus himself.

The band’s musicians hail from Italy, Spain, Greece and Turkey performing in their own languages and also in English, French, Hebrew and Russian.