This guitarist is available for concert and function work in Dublin and the surrounding areas, playing classical repertoire, Flamenco and Jazz arrangements.
Share Facebook Twitter
Recommended 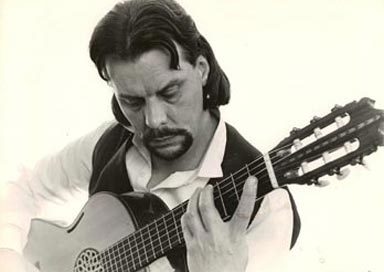 The Dublin classical guitarist was born in Dublin and is available for weddings, functions and concerts. He trained at the Royal Irish Academy of Music (where he was a scholarship recipient), The Leinster School of Music and the Royal College of Music, studying both guitar and violin.

He is available for both concert and function work in Dublin and the surrounding areas, playing the standard classical repertoire, as well as Flamenco and Jazz arrangements.

Long established as one of the leading exponents of the classical guitar in Ireland, The Dublin classical guitarist performs regularly at the National Concert Hall, The Bank of Ireland and the Instituto Cervantes, amongst other venues. He has also given concerts in England and Spain and he has been invited to give a solo recital in Vienna on the 25th March 2008.

He performed a solo recital in the John Field Room at the National Concert Hall which coincided with the release of his CD which apart from works by Guiliani, Pizzolla, Barrios etc., featured new preludes for the guitar which were written for him by Dr. Martin O'Leary of NUI. In his last recital in the John Field Room he gave the Premiere of Dr. Martin O'Leary's second guitar Sonata and composers such as Colman Pearce and Bernard Boran have also written pieces for him.

The Dublin classical guitarist has been a concerto soloist with the RTE Concert Orchestra, and was also chosen as guitar soloist with the Symphony Orchestra for the Bolshoi Ballet's Irish tour at the Point Depot in 1989.
He has recorded for RTE radio and Television, the Arts Channel , Lyric FM ,and BRT (Belgium Radio )
He has also directed music for the Dublin Theatre Festival. He has taught at the Conservatory of Music and Drama since 1982.

Quotes from the Irish Times:

'His undemonstrativeness had a distinctive type of authority and intimacy, these being of the sort which can draw an audience in, to become quietly engaged in the player's world'

'He played with admiral skill and smoothness'

'The Flamenco music was agreeably suggested by his interpretation'

'He drew his audience into an intimate world'

'He provided a memorable experience'

“Many thanks for your performance last weekend. We received excellent feedback and are delighted! I'm sure we will call on you again! ”