This UK Qawwali group are the leading UK Sufi Qawwali band, but they also offer Bollywood music performing the art of Qawwali, the devotional music of the Sufis
Share Facebook Twitter
Recommended 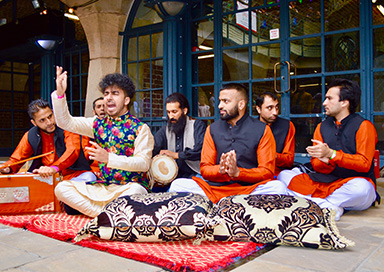 This UK Qawwali group are the leading UK Sufi Qawwali band, but they also offer Bollywood music, primarily performing in the art of Qawwali, the devotional music of the Sufis.

They provide beautiful and traditional music for Pakistani weddings and events.

The lead Qawwal, is widely credited for his virtuoso talents in Qawwali and Naat to a range of international audiences, particularly in the UK. He performs the sacred art form with his mesmerising vocals that create a powerful resonance encompassing the most complex techniques of the 700-year old tradition. He has been rigorously trained under some of the legends of the music industry. Coupled with the disciplined training of the Party, this generates a fiery and compelling experience, as enjoyed by audiences around the world.

Born in Pakistan, he has been performing since the tender age of 13, where his first public performance was at his International School Sufi Day. Initiated and trained under the Ustad Nusrat Fateh Ali Khan Memorial Academy UK, he was appointed the Head of the Qawwali party with the permission of Haji Muhammad Iqbal Naqeebi (Secretary & Manager of the late Ustad Nusrat Fateh Ali Khan). He is also the ‘shagird’, or disciple, of world-renowned Ustad Iqbal Hassan Khan (Gujranwala), influenced by the legendary and authentic style of qawwali as popularised by Ustad Nusrat Fateh Ali Khan and Ustad Arif Feroz Khan Qawwal.

Today, he is in high demand, performing across the UK & Europe, and engaging in collaborations with various artists across the world. He is strongly established as an artist in UK qawwali, and has received recognition from the qawwali circles for his humble rapport.

The Group are now available for weddings/festivals/corporate events/charity fundraisers/private occasions.

“Absolutely no doubt this is the best qawaali group in the U.K. I invited them to perform at my sisters Baraat function at Thornton Manor Cheshire and they were the highlight of the wedding. Top draw entertainment and very humble and approachable people. Qawwal bhai & the whole group were very nice. The whole room was buzzing these guys are going to go to the top it's just a matter of time. ”

“It was an honour to have this qawwal and his team perform for us at the University of Bradford Union of Students. Students and staff loved every bit of the evening and continue to ask when we will be arranging the next performance. The way he energised everyone in the venue is something we would very much welcome again at Bradford and would hope to arrange another event very soon. ”

“From the moment of booking, till their final execution, this Qawwal have shown a sense of professionalism that is all too often overlooked. They catered to our every need. Step by step, in a collaborative effort we formulated a itinerary of the day, worked upon the songs that would best suit the occasion and provided foresight for any logistical issues that may arise. On the day itself, I speak on behalf of all those who attended our Walima, when I say what an absolutely fantastic performance your team put on! Your personalisation was superb and much loved by all; making us feel welcome and included. These chaps are certainly gifted and if by now you're reading this and still contemplating on a group of talented musicians, please look no further as these artists are not here to disappoint. Once again thank you to Qawwal and company for providing that special edge to our Walima! We wish you only the very best in the future, inshallah! Kindest regards, ”