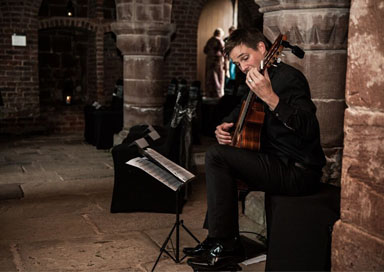 The Lancashire Wedding Guitarist is a brilliant romantic classical guitarist and provides a unique blend of Spanish classics through a modern popular song.

He is also a season performer with hundreds of hours of professional playing for BBC, Rock FM, Lancashire County Council as well as several 5-star hotels.

The Lancashire Wedding Guitarist has a wide range of repertoire from classics such as Cavatina - The Deer Hunter, Recuerdos de la Alhambra, Romanza and Bach's Prelude, through to arrangement of popular music such as Fields of Gold.

“Booking was easy. Very accommodating re Covid changes, thank you. Perfect for our party in the garden setting. Received many compliments from guests about how lovely the music choice was but not too intrusive and still allowed for conversation. Guitarist was really lovely. Highly recommended. ”

“Hi ... we were very happy with the guitarist and his performance. He was very accommodating and he listened and provided exactly what we wanted . Lovely Spanish and classical guitar music! ”

“The ladies of Pulham St Mary are still talking about the classical guitarist in the tuxedo! His lovely music really contributed to making our Restoration Roadshow a very special event. ”

“He played at our library during a classical guitar recital, as part of the national "Make A Noise" in libraries. The event was extremely successful with a large number of people stopping by to listen to him. He was wonderful in his playing and was open to questions in between performances. He was very professional and built up a good rapport with his audience during the afternoon. We've asked him to play again for us next year, for a music therapy event. ”

“The music he helped us choose for our wedding was so appropriate and extremely well presented on the day. He offered an impeccable, reliable service. ”

“Everyone complemented the guitarist who made the atmosphere really special. ”