Benoit Viellefon's incredible 7-piece swing band will blow your guests away with their authenticity and talent. Available for corporate events with orchestra!
Share Facebook Twitter
Recommended 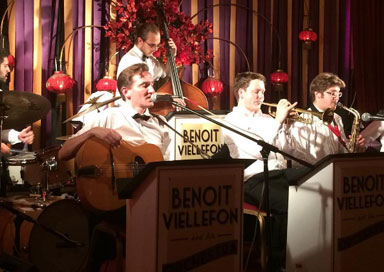 Benoit Viellefon, French singer and guitarist, fronts two of the leading vintage dance music ensembles at work in Europe today, hand-picked from among the finest musical entertainers in Europe. Monsieur Viellefon’s Orchestra and Hot Club are the hottest live outfits for all those who revel in the nostalgia and elegance of a bygone era, performing a repertoire consisting of the most beautiful and uplifting songs from the 1920's, ‘30's and ‘40's and originals in the same classic style.

"Thanks for playing at my birthday party. You were amazing, the music was brilliant and you are all very talented." Madonna (her birthday party)

The Orchestra is in huge demand for major cultural events and concert hall performances, including headline slots at Glastonbury’s Jazz Stage, the Rhythm Riot Festival, regular appearances at the Royal Albert Hall, William & Kate’s Royal Wedding and a host of European tours.

Benoit is also proud to present his all-acoustic Hot Club, an intimate alternative to the Orchestra for smaller venues and private parties. The Hot Club performs the best of gypsy jazz, French musettes, and timeless melodies from the pens of the master songwriters of the 1920's and 1930's.

“I just wanted to say an enormous thank you to you and the orchestra. Your set was absolutely fantastic and bought the weekend to the perfect conclusion. As always, it was a pleasure to listen and dance to you, and the reception at the end was well deserved. We will look forward to hearing you again soon and to welcome you back to Oxford for the Oxford Lindy Exchange 2016 if not before! ”

“You were the best band to listen to and most importantly to dance to at Twinwood festival 2015, an instant hit on the dancefloor. Please come back next year. ”