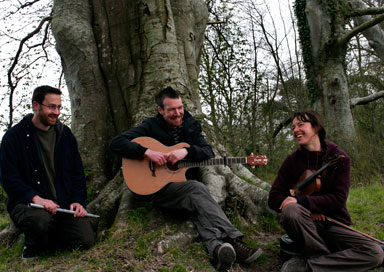 This Sussex-based folk group play mainly Irish traditional music and are experienced players at festivals, ceilidhs and sessions alike, renowned for their spirited and uplifting playing.

They are in essence a trio of fiddle, whistles and guitar but can call in additional members to provide a bigger 'band' sound and optionally can draft in a caller for ceilidh / barn dances.

Anna plays fiddle and has more than 20 years' experience behind her. Anna has impressive knowledge of Irish tunes and performs with great energy and intricate subtlety.

Jim is a whistle and flute player who has been active on the Irish scene in Sussex for around 14 years. He has appeared at folk clubs and festivals across the country.

Jim is a guitar player of some renown in Sussex, being a particularly skilled and sensitive accompanist for traditional Irish music. He also plays bodhran (Irish drum), which he has played in competition at National level.

“They were everything we hoped for and more - the music was beautiful and they were really professional (even though the event was a bit unusual). ”

“If you like Irish music, you'll love this band. They're the foot-tapping-est trio I've ever heard! ”

“They are brilliant. They work so well as a unit, every one making an outstanding contribution. ”

“I love their playing, it's floaty light. ”