This act is widely regarded as one of the UK's most stylish swing singers, providing a touch of class at weddings, private functions and corporate events.
Share Facebook Twitter
Recommended 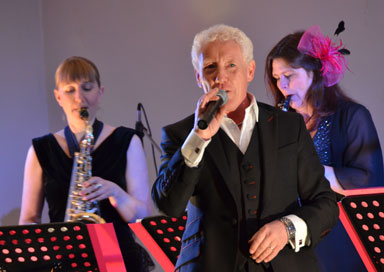 As a Rat Pack Tribute Act, this act is widely regarded as one of the UK's most stylish vocalists, providing a touch of class at weddings, private functions and corporate events, appearing throughout the UK & Europe and further afield aboard cruise liners. His repertoire includes timeless classics made famous by Frank Sinatra, Dean Martin, Sammy Davis Jr and many other ‘crooners’.

His recent TV credits include 2 appearances on the BBC TV’s ‘Don’t Tell The Bride’ and SKY TV’s ‘Cruising With The Stars’.

He is able to offer a variety of options to suit your needs and budget and can appear either solo or else with a band of various sizes up to an 8-piece line-up.

Where possible, he appears with an ALL-FEMALE band line-up to give the band a distinct look and appeal.

He will work with you to achieve the mood and tempo appropriate to your event, providing either 'easy listening' music as background to a dinner or drinks reception, or something more 'up tempo' for dancing. He can also perform a wide range of pop/soul & rock n roll classics if required.

Whatever your choice, he will bring a touch of class to your event and help to make it an occasion to remember!

“The band were fantastic. The music was great but he was also fantastic in getting everything organised for the night, helping us plan the sets and being super flexible on the day. ”

“Thanks so much to you and the Girls for making our event such a great night... the best band we have had since I have been involved in organising the Entertainment and I wish you every success for the future ”

“It was a great night Indeed and we really loved your performance as always! I have had more great feedback from students since. Thank you again for creating such a good atmosphere and we look forward to having you back in our hall in the near future. ”

“A superb evening of entertainment with great comments received from our Dinner Dance guests. We would certainly recommend Gary Grace and his band who are talented and professional in what they do. Once again thank you for a great night. ”