This Dorset classical guitarist has been performing at weddings, dinners and concerts for over 25 years and is a past Young Musician of the Year Semi Finalist.
Share Facebook Twitter
Recommended 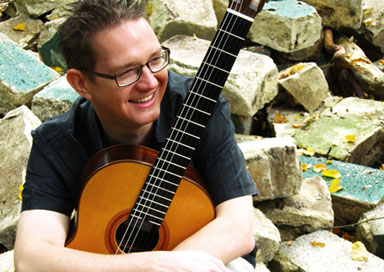 This Dorset classical guitarist has been performing at weddings, dinners and in concert for over 25 years. He is a past Young Musician of the Year Semi Finalist and studied classical guitar with Robert Brightmore at the Guildhall School of Music & Drama and John Mills at the Royal Welsh College of Music & Drama before taking lessons with Benjamin Verdery in New York.

Over the years he has performed for Sunseeker International, ICI, British Airways, on P&O Cruises and at hundreds of weddings all over the UK. He has also performed as part of Yehudi Menuhin’s “Live Music Now” scheme and on BBC 1, BBC 2, ITV, BBC Radio Wales and was featured on BBC Radio 2 in the Young Musicians’ Series.

His repertoire features a mix of the old and the new giving a very balanced programme seasoned guitar lovers and new comers can both enjoy.

Every bride and groom’s wedding is unique so he treats each occasion like a performance. From playing as the bride walks up the Isle, the drinks reception, wedding breakfast or any combination you desire, he is happy to tailor his playing to suit the needs of your day.

"In the week of Rodrigo's death, the inclusion of En Los Trigales made it rather an "in memoriam" piece. Martin created an impressive and memorable tribute to the great man." Classical Guitar Magazine

“Just wanted to say a massive massive thank you for playing so beautifully yesterday, you had the entire audience in raptures and everyone has said how amazing the piece was; personally I thought you were absolutely amazing. ”

“Like many others I enjoyed your performances very much ”

if you ever come up to north east England we wil be first in the queue for tickets., Alex Cross (P&O Arcadia)

“Thanks again for the pleasure and entertainment you provided for us. From my point of view it truly was the highlight of the cruise ”

“Thank you so much for playing at our wedding. We had an amazing day and your contribution helped to make it so special. ”

“We really enjoyed the music. One of the guests said it added a touch of class to the wedding!! We just wanted to say thank you for everything. ”

“A huge thanks for playing throughout our ceremony. We will remember and treasure those memories always. You definitely made our day special. ”